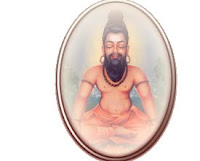 Once upon a time both  Mithra and Varuna  had a sort of love contest in respect of the heavenly damsel  Urvasi  and  that they could not do anything more than depositing their fertile seed, one in the pot and the other in the sea.
In time Agasthya  was born from the pot(kumpam), and Vasistha , one of the reputed Saptarisis ,started his life from the sea.
That's why Akasthya  called the other name by kumpamuni.For an account of diminutive size he was known as Kurumuni.There are variations of this story in later traditions.
His marriage with Lopamudra, the daughter of a Vidarpa king, has also parallel in his wedding of  Kaveri  the  daughter of Kavera.

Tredition credits  Akasthya with founding the first Tamil Sangam  and presiding over it.
Akasthyar compose a wellknown  book of  Akasthyam, had really treated of these three kinds of  Tamil  Arts  namely Iyal, Isai and Natakam.
He is also represented as having composed the first  Grammer of Tamil Language by his first student Tholkappiyar in the book Tholkappiyam.
More in next post. 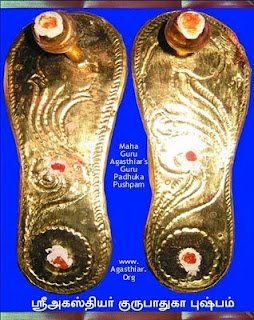 Om  Akasthyar Thiruvadikal Potri  Om.
Posted by nagaa at 2:46 AM